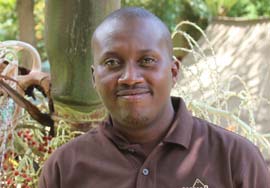 Maningo was amazing!! Super knowledgeable and and always able to get us to just the right spot to have some amazing animal encounters. He’s also hilarious, and kept us laughing throughout the trip.

I can’t imagine a better guide than Maningo. In addition to being extremely fun to be around and enjoyable to talk to, he was totally organized and punctual and knew everything we needed to know as we progressed through the safari. He ensured that every step of the trip went smoothly and that we didn’t have to second guess anything or keep track of all the details, enabling us to focus on the wildlife and relaxing in the evenings. Finally, Maningo’s knowledge of wildlife, his ability to spot animals, and … Read More

Maningo was great! He shared lots of interesting facts and stories about the animals we saw and made sure we saw everything we wanted to see. He was also very respectful of the wildlife. We saw other trucks that would pull as close to the animal as possible while they were trying to cross a road or move away from the vehicles and Maningo never did that. He would find a good spot and stay there and wait for the animal to come close. He always made sure we had … Read More

Lions and Zebras and Leopards…Oh My!

Maningo is wonderful. I think he loved the animals as much as we did. He has a laid back personality and is pretty relaxed.

An excellent travel and safari experience!

Maningo was excellent. He was so helpful, knowledgeable and a patient with all our questions. He struck just the right balance between providing us guidance and structure and letting us enjoy things at our own pace. I would recommend him without reservations.

Maningo made our journey memorable and perfect!

Maningo tailored the trip to us – he focused on birds for our daughters and was wonderful about finding many different animals. He was a safe driver and always double checked everything. Best of all, he has a beautiful personality and great sense of humor. We enjoyed being with him very much!

Maningo did such a good job spotting and tracking animals during our game drives. He had great vision, and also had a great sense of when to stick around (as other vehicles were leaving) because he knew the animals would become more active or move. It’s like he could see into the future.  Highly enjoyed my time with him.

Maningo did a great job in guiding us through the safari and we were able to see everything we wanted to see. He was very outgoing and knowledgeable and we were able to get to see animals we wanted. He found out that my favorite animal was the cheetah and made sure that we found some for me to see. We were also able to see lions climbing trees after his insistence that we stay in a certain spot as other jeeps were driving away. He did a great job … Read More

Maningo is awesome! He worked so hard to make sure we saw EVERYTHING! He is super easy to be around….us maybe not so much for him! 🙂

Maningo is great — very calm and flexible to what we wanted. Only feedback would be for him to give his opinion more! He is experienced and when we heard from stories and examples, they were very insightful!