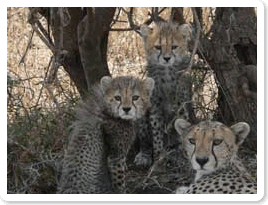 Description: This untouched uninhabited area is home to the biggest herds of elephant and other wildlife to be found anywhere in the world. The large meandering Rufiji River with its network of channels, connecting lakes and lagoons offers visitors the unique opportunity to go on safari by boat and experience the spectacular concentration of wildlife from an unusual perspective, especially during the dry season when animals congregate.

Game drives and walking excursions are also very rewarding. There are elephant, hippos and rhino (although few now remain). This reserve contains about one third of all the wild dogs (often called painted dogs), in the world.

Time: Given the distance, spend at least 3 nights. Best during the dry season.