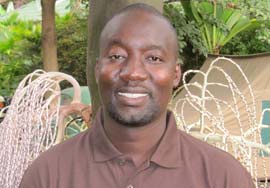 Fun to chat with!

Willy was excellent. We enjoyed each of the eight 9+ hour days spent with him. Willy is great at spotting wildlife, knowledgeable, safe driver, fun to chat with.

Access 2 Tanzania is THE Company to Book Your Safari

Willy is the best. He was so excited to get out there and drive with us (as opposed to making us feel like we were taking him away from something he’d rather do) and was equally reluctant to head back to camp at the end of the day. He asked us each day what we wanted, gave us options, and then did his best to make it happen. His humor and desire to educate us on what we were seeing was icing on top. Anything we wanted, Willy tried to … Read More

Willy was very relatable and personable. He had a lot of experience, knew where to take us, made sure we saw as much as possible. He was considerate and flexible with us. We couldn’t have asked for a better guide. We even met his sweet son.

Usually feedback includes negatives and positives. there are NO negatives. Wily became our friend on the first day. He is intelligent and able to teach his wealth of knowledge in an engaging and straightforward way even while driving! His discussions of Tanzania, the Masai culture and the animals were always fascinating.He always made all of us feel included from my quiet son to my ever questioning daughter! He was aware if any of us seemed uncomfortable or might need some help in some way. In some potentially uncomfortable situations in … Read More

Willy is an excellent safari guide. He was very good about following COVID-19 protocols. He was very knowledgeable about animals and had good suggestions. He listened to our requests and made sure we saw everything we wanted to.

Eagle eyes and the social butterfly

Willy was excellent! From a safari guide perspective I can’t see how he could have done better. He’s knowledgeable about the fauna and flora, has super human eyes (really, amazing), knew the area well and seemed to personally know every guide in the area. He was very conscientious both about our safety and well being, as well as the environment. We found it refreshing that he had to stop to pick up some trash or help out another guide that was having issues. He was engaging and got along well … Read More

Expensive but worth every penny

Absolutely amazing driving skills on very rough roads. We expected he would know a great deal about animals but he also had incredible knowledge of birds (my husband took a picture of every single one and Willy knew all their names!).

Access2Tanzania travel company-don’t look any further when you have found the best!

Great! Great! Great! Everyone was so comfortable as you could tell Willy knew what he was talking about. On the first night, after arriving late at the airport, we were hungry and he suggested we stop for chicken at a curbside venue. We were so instantly trusting of him that we said “sure” and had such a good chicken meal sitting at a small table at almost midnight on our first visit to Africa! The safaris were awesome. He was well known by other tour company drivers and he said … Read More

Great source of knowledge enable us to have a once in a lifetime experience.

Willy was with us for the first six days until he had to return home due to a death in the family. He was very personable and shared his knowledge very effectively. Our group seemed to connect with him immediately. He helped us understand culture of the people of Tanzania was a very good representative of the people. He displayed expert knowledge of the wildlife and vegetation we experienced and was effective at answering questions and providing in depth explanations to help us better understand the interactions between animals, the … Read More

Incredibly kind, knowledgeable, and delightful to be with for 10 days!

We had two guides due to an emergency in Willy’s family and Alex joined us for 4 days. Both of them were exceptional! The best guides I have had on any trip anywhere. They were incredibly knowledgeable on animal behavior, culture and the people of Tanzania. In addition they were kind and very receptive to our individual and group needs. Because we all wanted to maximize our time in Tanzania they were with us from early morning to dinner time and I know they had work to do before and … Read More